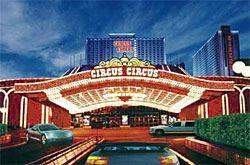 Despite the fact, that the casino industry in Las Vegas started developing back in the 20th century, it seems sometimes that this process is totally endless, and numerous creatively-designed gambling houses are continuously appearing not only within Las Vegas Strip, but in other parts of the city as well, frequently replacing the old-known casino veterans.

Undoubtedly, the newly-built live gambling houses in the world's most visited casino center turn out to contain much more, than mere betting establishments, but may be rather called luxurious resorts, within which one can easily find all sorts of entertainment, no matter what his/her tastes are. Here, taking into consideration the amount of benefits, offered by the young rivals on the market, the well-known giants are forced to modify the quality of their services as well, in order to survive in times of strong competition.

Unlike many those, who couldn't manage to resist the pressure in the casino industry, the accomplishments of the well-known Circus Circus casino' owners (MGM Resorts International, which also has the prominent MGM Grand casino and other casinos in its possession) are truly amazing. Having started its history in 1968 as a gambling establishment, the place has nowadays converted into the first-class casino & hotel resort, occupying 11,100 sq. m, which provides its clients with incredible choice of amusement options:

All things considered, Circus Circus casino & hotel resort with its famous clown sign at the entrance has become an embodiment of the best-quality services and unbelievable gambling opportunities. Therefore, it can easily compete with the betting establishments of the new generation, and the team of the resort's devoted admirers has even enlarged in the recent years.