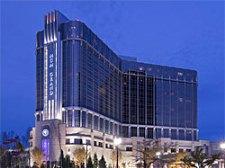 Undoubtedly, the name of MGM Grand casino is familiar to every single person in the world, especially if one has had at least one journey to Las Vegas. Having initially built as the largest hotel & casino resort in 1993, it now occupies the 2nd place, after The Venetian, but definitely exceeds the latter in its popularity.

Being one of the most famous members of MGM Resorts International (which has ownership of the Bellagio, the Mirage casino, New York-New York and Circus Circus casino as well) MGM Grand casino, obviously, deserves such a name, as the amount of excellent-quality services and incredible gambling opportunities can easily impress even the most fastidious visitors of all ages and preferences.

Having a huge territory of 170,000 sq. feet at its disposal, MGM Grand casino definitely belongs to Las Vegas casinos leaders, concerning the range of amusement options, available for clients. These are well-known to include:

In a nutshell, if Las Vegas should be called the city of no limits and restrictions, it's much due to such giants as MGM Grand casino with its inconceivable entertainment options, which create such an image.