Las Vegas, obviously, deserves the name of the most prominent live casino centre of the world, possessing the 2nd largest number of resorts on its territory, even though global gambling industry is no longer that much concentrated, and has already spread on to other countries, like China, for instance. 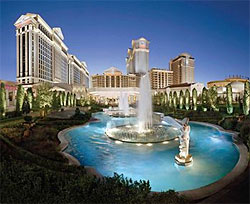 Together with the newly-built casinos, designed in such an extraordinary way, that can strike every visitor, the well-known city giants, like Circus Circus casino, MGM Grand, and Caesars Palace casino as well, haven't yet lost their admirers.

Having been initially constructed back in 1966, Caesars Palace casino has till now preserved the atmosphere of the Roman Empire in the look it'd represent at the beginning of the current millennium, where the personnel is so hospitable and caring, as if all the resort's clients were real Caesars.

Belonging to Caesars Entertainment Corp., which also comprises resorts among Atlantic City casinos, the Las Vegas hotel & casino star of Caesars Palace casino is still the most glittering one.

Notably, among the most important advantages, provided to visitors, there're might be defined the following:

Caesars Palace casino & hotel resort may be considered a perfect option, especially for people, who have come to Las Vegas for the first time, as the atmosphere within its walls is truly unique.