There's absolutely no city in the whole world, which can compete with Las Vegas in terms of popularity among gamblers, the latter being generally believed to be the true casino-king. 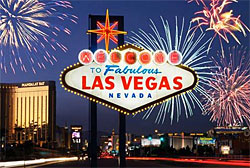 Known to be rather young, as far as the city's history is concerned, Las Vegas casinos have managed to develop incredibly fast, much due to Nevada's being the first state, where casino gambling was officially permitted at the end of the 19th century. From those times on, with a little exception, concerning the so-called "anti-playing" period, when all gambling games were banned within the US territory, it's was the casino industry which has been filling the considerable part of the city's budget.

It were the 1940's, when the Golden Era of Las Vegas casinos started along with the wide-scale construction of gambling houses, which were supposed to attract thousands of tourists, looking for fun and profits, and such ambitious plans soon became a reality.

Much because of the state's lenient general laws and taxation policy, in the second half of the 20th century the star of Las Vegas casinos was already shining brightly, and the city's fame of "the place of unlimited pleasures" spread far outside the USA. Undoubtedly, it were the times of total success, when the most incredible shows were performed, the craziest wedding receptions took place and the first inconceivable jackpots were hit by casinos' clients.

No wonder that everyone, including average visitors as well as famous movie-stars have chosen the city to immerse themselves in all the kinds of entertainment.

Modern Las Vegas casinos are even more glittering, with its luxury hotels and large shopping centres, like Caesars Palace casino, hosting an unbelievable number of tourists every year. In particular, the city's part, known as Las Vegas Strip, has become the home for first-class resorts, which include not only huge gambling areas, but large shopping malls, cinemas, night clubs and amusement parks, the most well-known among which is Adventuredome.

Stretching for 4.2 miles, the Strip, which initially referred to Las Vegas Boulevard only, now comprises such a diversity of gambling houses, hotels and resorts, which can strike everyone, each of them presenting their customers with an array of unique peculiarities, like the steamy volcano of the Mirage casino, or the live lion show in MGM Grand, for instance.

"What happens in Vegas, stays in Vegas" - this phrase is familiar to everyone, who has at least once had a journey to the city, where all the maddest dreams can come true. And it's not only about the amount of money, one can win, while playing slots, or blackjack, it's also about all incredible impressions, received from any city's sights, and even the atmosphere, which enables every single visitor to have a real GOOD TIME!